The new casino in Everett dominates the skyline. Not everyone’s a fan

Despite how it feels to Nancy Thomas, the Wynn Resorts casino that appears to have been airlifted straight from the Vegas Strip and dropped into a desolate patch of Everett is not literally “menacing” her.

Twenty-seven stories high, 11,000 tons of rebar strong, a muddy color onlookers can’t quite name — even if it is proprietary “Wynn bronze” — the casino looms when Thomas passes by on I-93. It dominates her view when she takes the Orange Line from Somerville, where she lives, to her real estate job in Boston.

Its imposing visage strikes again when she strolls the Mystic River, trying to enjoy nature.

“It’s like an evil person watching over me,” Thomas said in Assembly Row on a recent afternoon, her glass-and-steel tormentor over her shoulder, a fresh mani-pedi, an on-trend teddy bear coat, and a giant Louis Vuittan duffel giving zip to her look.

Get Metro Headlines in your inbox:

Even as the state’s gambling commissioners are deciding whether Wynn Resorts can keep its $2.6 billion casino — in the wake of allegations of sexual misconduct against Steve Wynn, which he denies — the casino itself is nearly finished, slated to open in June, and has become a dominant part of the Greater Boston skyline.

Viewpoints vary. But few people are without an opinion.

Ali Nix, a native Everett resident, is in the “monstrosity” camp.

“It’s an eyesore,” said Nix, a publicist who’s confronted by the building every time she drives Route 99 to work or the gym.

“You look at all of these developments in Boston and they’re all pretty blue glass,” she said. “I think the casino was attempting to go rose gold but it looks brown.”

The casino is in Everett. So why should non-Everett-tonians care so much about its appearance?

Because what happens in Everett doesn’t stay in Everett.

Innocent people passing by on the T or the roads can see it, as can those who work or live in the fancy new office or residential buildings in Assembly Row.

The Orange Line counts about 51,000 weekday journeys between Wellington and Assembly stations, where Encore Boston Harbor is most visible from the rail (some riders are likely counted twice, on the way to and from work).

Add those viewers to another nearly 300,000 motorists traveling on I-93/Zakim Bridge, Route 1/Tobin Bridge, and Route 99/Alford Street Bridge, according to the state Department of Transportation. (As with the Orange Line, some drivers are likely counted twice.)

But let’s not forget: The state did vote in favor of casinos — rejecting a repeal effort in 2014 — and not everyone considers “Vegas” a bad word.

(Indeed, Encore Boston Harbor expects 8 million visits a year, “from across the globe,” according to its website.) 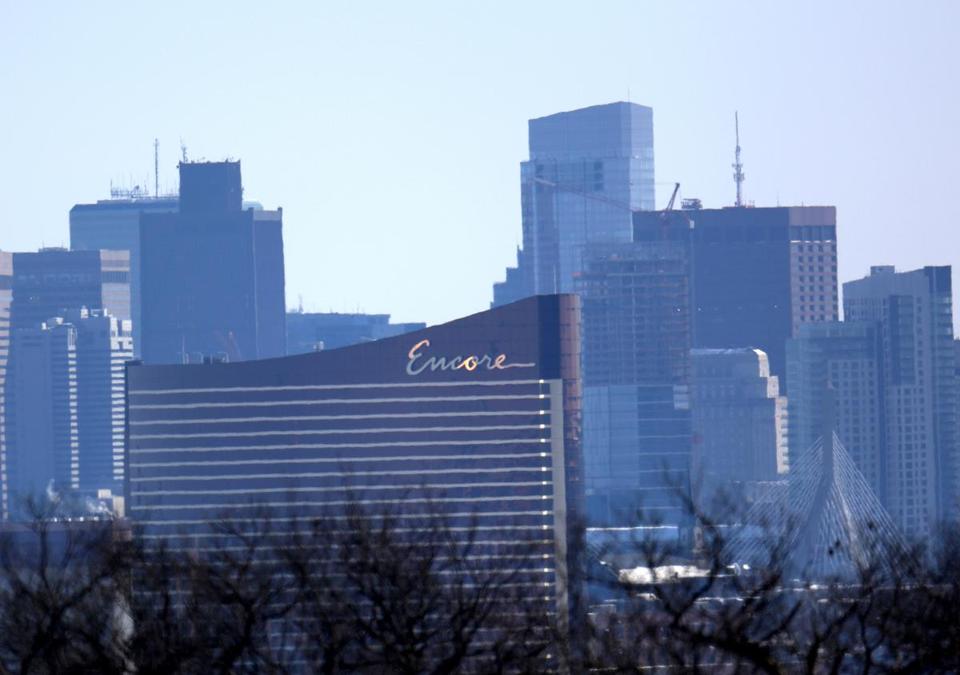 The 27-story tall structure has become part of the Boston skyline.

On a recent weekday Regina Barros, of Dorchester, stepped off the T at Assembly, gloried in the nearby presence of the casino, and asked her daughter to take a picture, so lovely was the view.

“It looks like Vegas,” said Barros, who works concessions at TD Garden.

“Look at the other stuff around it — a power plant, a junkyard, an oil tank farm,” said Kristen Eck, WBZ NewsRadio 1030 helicopter reporter. “It’s probably the most attractive thing in the neighborhood.”

Wynn Resorts employees recognize the building as trademark Wynn bronze, but for those not in the firm’s employ, naming the color has become sport.

“It’s the same color as the lamp in my grandma’s apartment,” one passerby said. Others likened it to: “old union hall brown,” “ ’70s car brown,” and “taupe.”

Perhaps because the Everett casino’s very existence is under attack, Wynn Resorts was not as defensive about the tower’s appearance as one might have suspected.

1) Wynn Resorts originally submitted a different design but the company was urged by state officials to redesign it to look like the iconic Vegas casino.

2) That design — the one locals are mocking now — is so iconic it’s included in the LEGO Las Vegas architecture set.

3) Encore Boston Harbor looks very pretty at night because “the signature white [horizontal] banding on the building benefits from up lighting at night,” he said.

4) Wynn bronze is actually very nice, in two specific ways: “It offers a beautiful reflection of its surroundings at night,” Weaver said. “And it creates a very warm, inviting glow inside the rooms.”

Well, whatever color the casino may be, and whether “Vegas” is a compliment or an insult, one thing is clear: It’s here and it’s us.

As Eck, up in her helicopter, put it: “Boston still is growing, so the skyline is changing. Maybe people won’t put it in the same elite category of the Citgo sign, but there will be a point when it does become associated with the city.”